The Rolex Daytona: An Iconic Yet Amazingly Hard to Find Timepiece

Thanks to a 2017 auction hosted by Phillips, an upscale auction house in New York, the Rolex Cosmograph Daytona has gone down in history as one of the most expensive watches ever sold. The timepiece, gifted to late actor Paul Newman by his wife in 1968, sold for an impressive $17,752,500, setting a world record and proving the Daytona one of the most desired luxury watch series in the world.

The Rolex Daytona is one of the most sought-after Rolex watches, but it is also hard to find. Despite somewhat underwhelming origins, the Daytona series now boasts some of the longest wait-list times among high-end luxury watches. Explore the exciting history of the Rolex Daytona and discover how this watch became both so iconic and so hard to find. 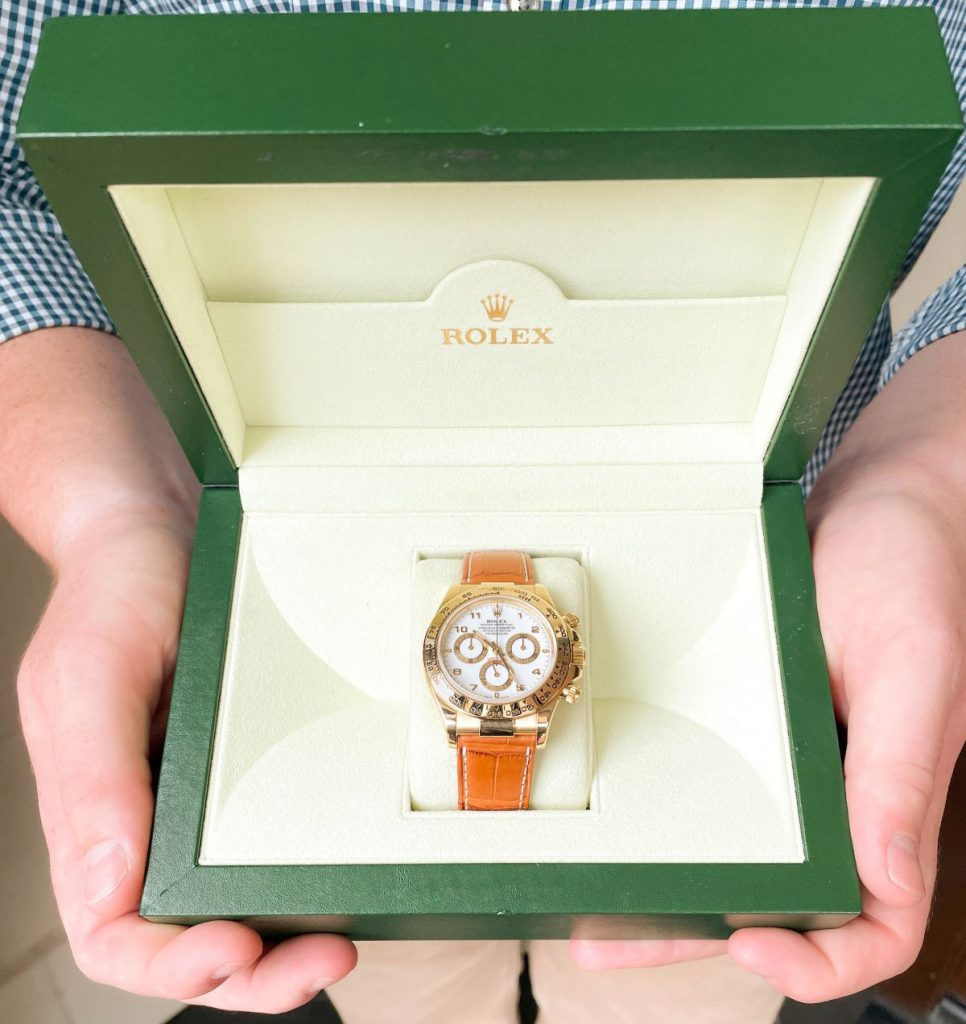 Origins of the Cosmograph Daytona

Although the Daytona watch series got its start in the 1950s, Rolex’s association with racing began much earlier.

What the world knows as NASCAR got its start in the early 1900s in Daytona, Florida. Racing was largely a fringe sport at the time, but by the 1930s, it had gained popularity, creating racecar celebrities like Sir Malcolm Campbell.

Mr. Campbell was known for wearing Rolex watches during his races and touted the durability of the Oyster case. This connection between Rolex and car racing grew over time, and Rolex began experimenting with a chronograph that could help racers track their speed, distance, and time during a race. Rolex finally debuted its first chronograph in 1955. 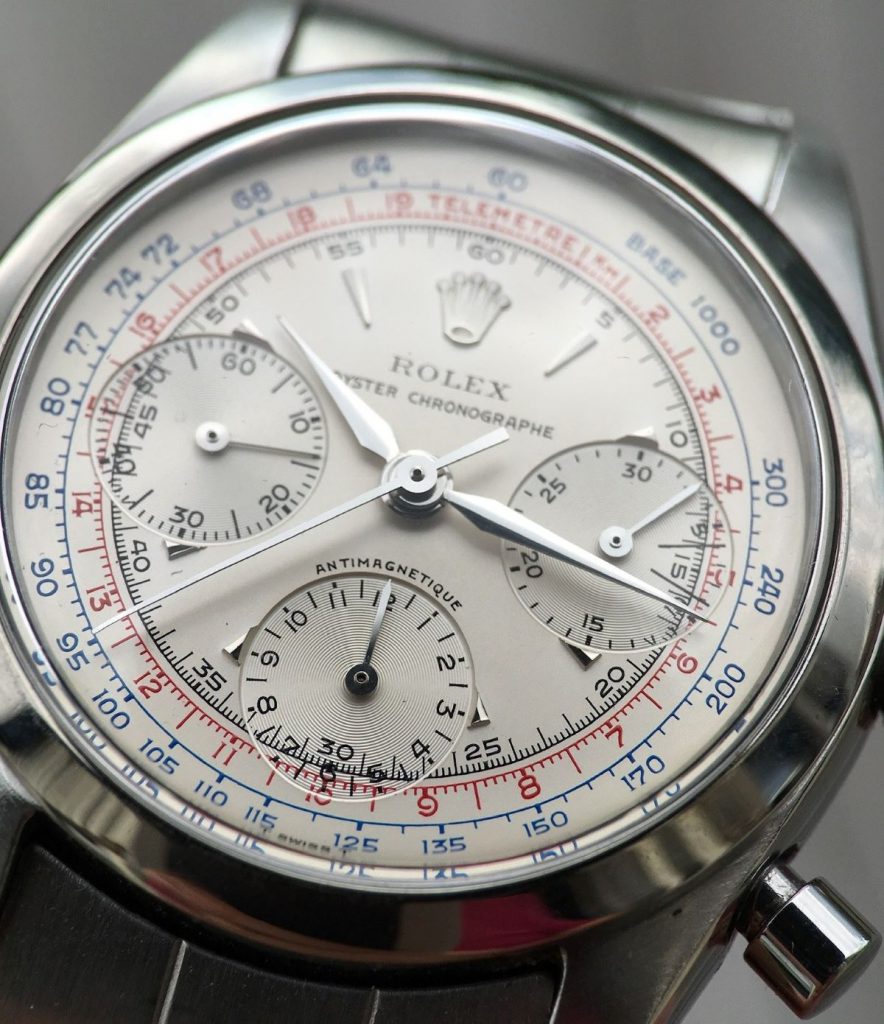 The 1955 release of the pre-Daytona, Reference 6234, marked the start of the Rolex chronograph. The pre-Daytona timepieces featured tachymeter and telemeter scales and three subdials, all in the classic Rolex Oyster case.

An estimated 2,300 chronographs were made of stainless steel, while less than 200 were made of gold with white and black dials. Because of their limited number, these items are some of the most sought-after by Rolex enthusiasts.

By the early 1960s, Rolex had begun experimenting with higher complications that allowed racers to track their speed and elapsed time. These pieces were nicknamed “Daytonas” in reference to the car racing capital and to reinforce that they were made with drivers in mind.

It wasn’t until 1963 that Reference 6239 was released. This model, manufactured until 1967, featured a tachymeter scale placed on the metal bezel that measured up to 300 units per hour. During this time, the Rolex Daytona began its rise to fame, largely thanks to celebrity racers like Paul Newman.

Newman was an avid and talented racer as well as a major force in Hollywood. He was known for wearing various Rolex Daytonas during his races, which contributed to their skyrocketing popularity. Collectors past and present pine over Paul Newman-style Daytonas, which feature a unique dial design and vintage aesthetic.

These updated watches showcase Rolex’s dedication to retaining function and style and are released in limited numbers.

What makes the Rolex Daytona so hard to find?

The combination of low production numbers of past and present models, the Daytona’s high complications, and the watch’s unique features, especially in vintage models, make it difficult to obtain.

Although the exact number of Rolex watches produced is a closely guarded secret, its limited production makes the Daytona so hard to find. The original iteration of the watch was rather unpopular at the time; therefore, only small numbers of the model were released.

Even as the popularity of the Daytona grew, Rolex continued to release only a limited number of timepieces. This makes vintage Daytonas extremely rare, and although it’s easier to get your hands on a newer model, it still proves quite difficult.

The Daytona boasts unique complications, even among ultra-technical and innovative Rolex standards. The chronometer feature makes the Daytona a stopwatch, which requires a high level of technical precision to create. This makes the Daytona rare in both production numbers and unique craftsmanship and design.

Daytonas are also hard to find because you almost certainly have to put your name on a waitlist to get your hands on one. The wait time for a Daytona, specifically a stainless steel vintage model, can be years.

Many Rolex dealers have a long list of qualified clients with whom they’ve built a transaction history. When a Daytona model comes into the store, the dealer contacts the top person on the waitlist to let them know the watch is available. This means that unless you have an established relationship with a Rolex dealer and are already on a waitlist, you may not get a chance to buy a Daytona series watch.

Like other classic Rolex timepieces, vintage Daytonas retain unique features that make them desirable to collectors.

These unique features include: 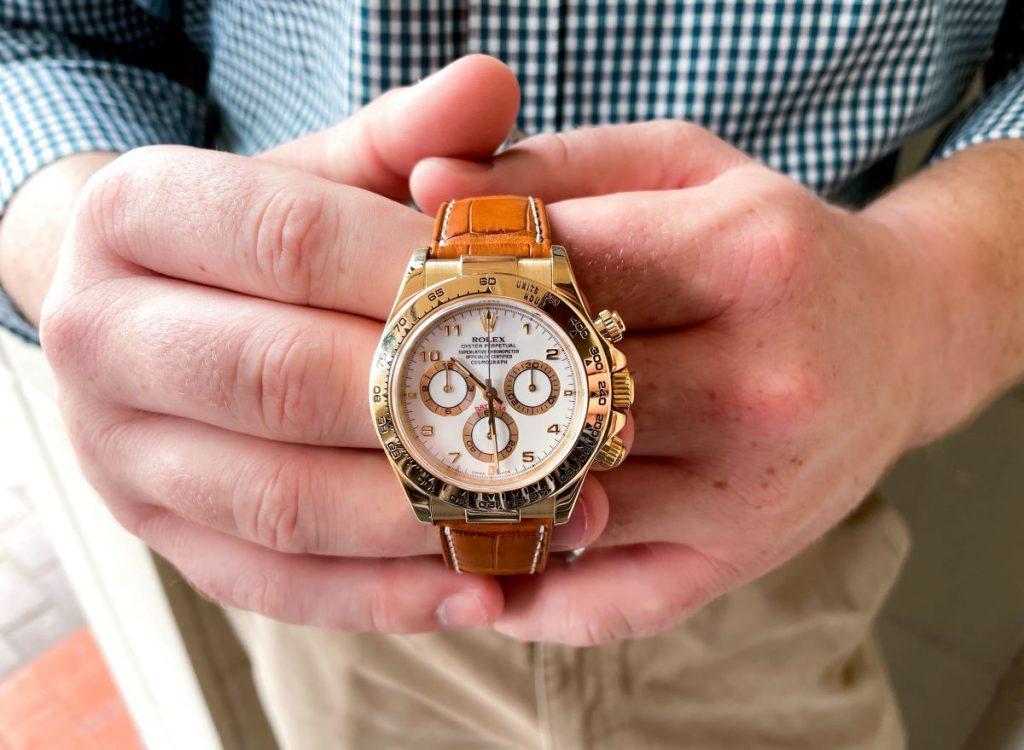 Put a Vintage Rolex on Your Wrist

Whether you are searching for a coveted Rolex Daytona or you simply enjoy the thrill of owning vintage and pre-owned Rolex watches, Bailey’s Fine Jewelry has a great selection to choose from. We currently have two beautiful Rolex Daytonas in stock and are sourcing more every day.  All of our pieces are cleaned and checked by our expert watchmaker. We offer virtual and in-store consultations for your convenience. If you would like to inquire about current or future Rolex availability, please contact us.

Join our waitlist to be notified of a specific model and shop our collection of Rolex and other luxury watches online until you find the perfect vintage or pre-owned timepiece for your wrist.