The TAG Heuer Monaco: Get in Touch With Your Inner Steve McQueen

HOME / Bailey’s Blog / The TAG Heuer Monaco: Get in Touch With Your Inner Steve McQueen

TAG Heuer has a reputation for producing superior luxury watches. Their deep connection to automobile racing has inspired several of their watch series including one of their most famous: the Monaco.

In addition to technical and design innovations, fans of the brand admit that one of TAG Heuer’s main attractions is its eternal sense of cool. This makes it no surprise that the King of Cool, Steve McQueen, was particularly fond of the TAG Heuer Monaco. 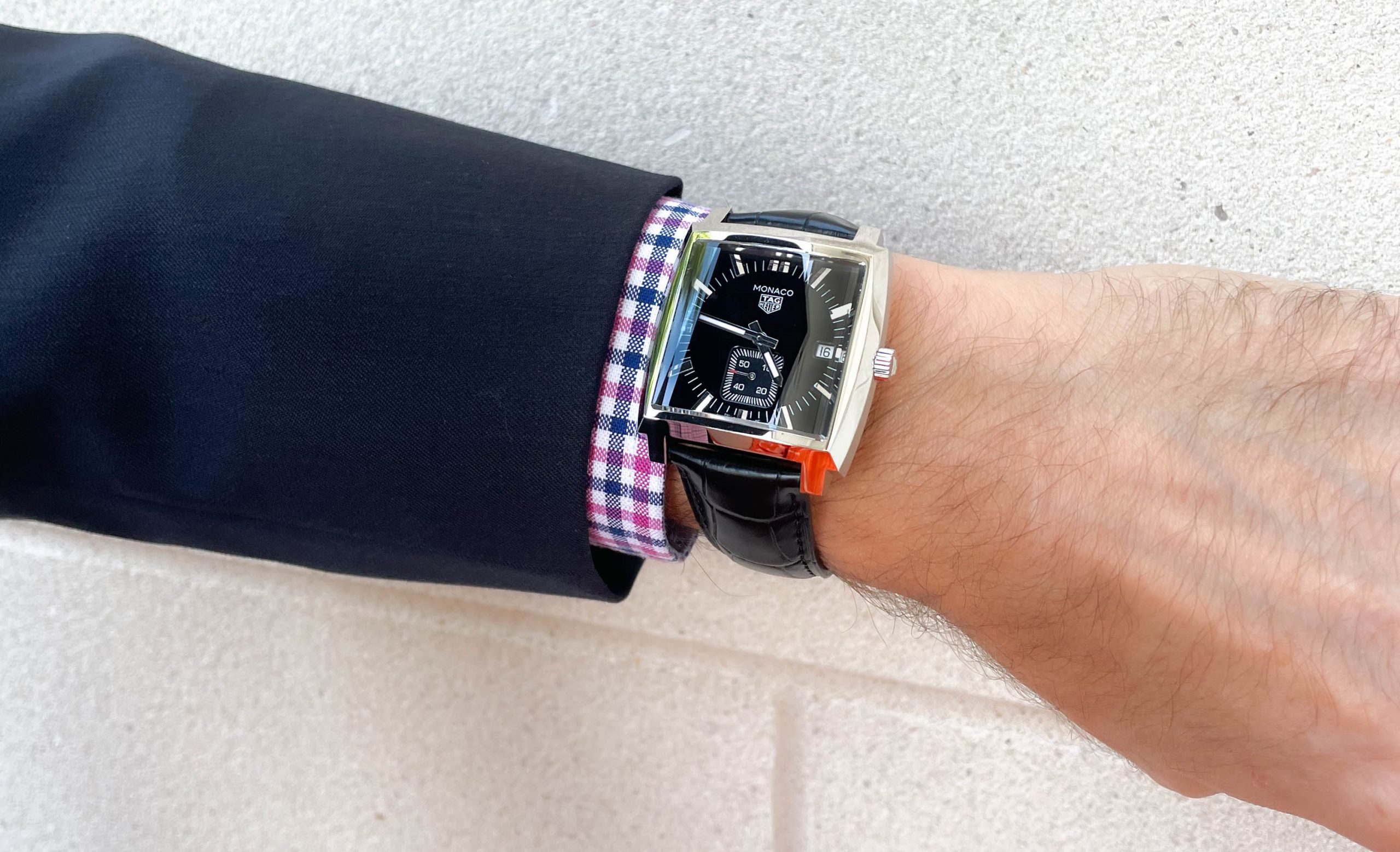 When the Heuer Monaco burst onto the luxury watch scene in 1969, it caused quite a stir. Not only did this timepiece boast some distinctive horological innovations, but it was also visually striking.

Although the market had seen square watches before, it had never experienced anything like the Monaco. This avant-garde departure from traditional sport watch design featured a fully water-resistant, self-winding chronograph with a square case, a bright blue dial with square subdials, and a left-mounted crown. The striking case was a sizable 39mm by 39mm and made a statement.

With a name that inspired the Monaco Grand Prix and Monte Carlo Rally, the Monaco helped establish Heuer (which became TAG Heuer in 1985) as a purveyor of racing watches. This reputation was later cemented by the brand’s twelve-year stint as the official Formula One timekeeper and the Monaco’s appearance in Steve McQueen’s racing movie, Le Mans.

The Many Innovations of the Heuer Monaco

It wasn’t just the unusual, square-shaped case that made the Heuer Monaco stand out when it was first released. One of the most significant innovations of the time that the Monaco boasted was water resistance.

In 1941, the brand decided to exclusively produce water-resistant watches to avoid costly and complicated repairs. Before the Heuer Monaco was released in 1969, there were no square, water-resistant sport watches on the market as square cases had been exclusively reserved for dress watches.

Making square-cased watches fully water-resistant was considered impossible due to the several failed attempts by other timepiece experts such as Omega and Rolex. When Erwin Piquerez’s iconic design was first perfected, it was incredibly unique and impressive. Piquerez’s design included a square black rubber gasket between the dial and the case that protected the watch from water damage.

This revolutionary case housed one of the Heuer Monaco’s other great innovations; the Chronomatic Calibre 11. At the time, this was the first automatic chronograph movement with a micro rotor. This feature was emphasized by the intriguingly positioned crown that sat at the nine o’clock mark which highlighted that the watch didn’t need winding. 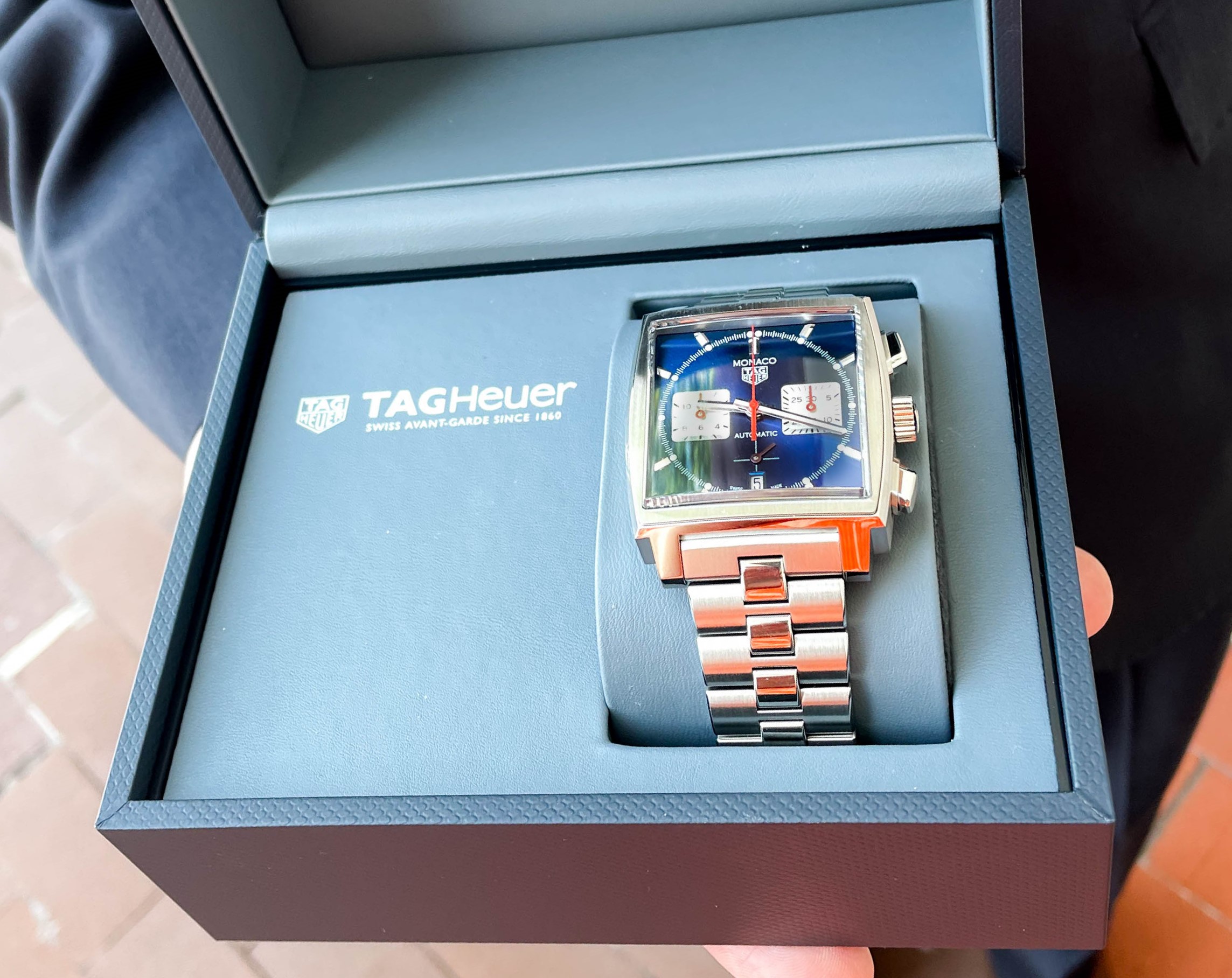 Like several of TAG Heuer’s most popular timepieces, the Monaco was inspired by car racing and perfected for driving making it the perfect addition to Steve McQueen’s wardrobe as he starred in a major motion picture entitled Le Mans.

The movie Le Mans, was released in 1971 and details the journey of one Porsche driver during the famous 24-hour endurance race. Le Mans was a passion project for McQueen, who was an automobile enthusiast himself. McQueen drives a Porsche and sports a Heuer patch on his overalls throughout the movie, a huge accolade for the burgeoning watch company. Even more importantly, McQueen wore an 1133B Heuer Monaco in the film which served as incredible exposure for the brand and the Monaco model. Thanks to the distinctive shape and color of the timepiece, it was unmissable on screen.

This historic appearance in a Hollywood movie about car racing cemented the TAG Heuer Monaco’s reputation as a racing watch. In addition, the fact that it was worn by one of the biggest icons of the day bestowed a level of cool onto the watch that brands can only dream of today. Steve McQueen, the King of Cool, was an influencer before his time. TAG Heuer loved the exposure so much that they still use iconic images from the film in their advertising today. 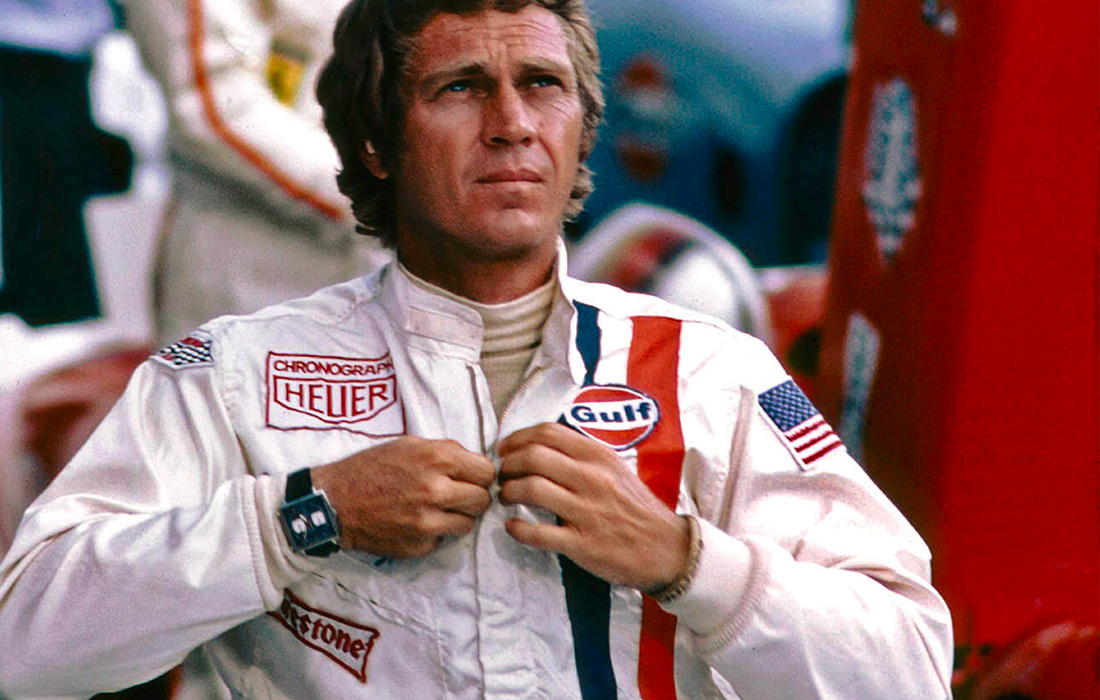 Both in terms of style and innovation, the latest editions of the TAG Heuer Monaco are still very similar to the original 1969 model. The brand celebrates the timepiece’s history and emphasizes its cool factor by describing it on their website as “the unique, square-faced icon of TAG Heuer’s avant-garde heritage and savoir-faire” and “a timeless emblem of rebellious style.”

TAG Heuer has retained the sense of innovation associated with their Monaco models by regularly updating them with unique features such as crystal bevel of virtually unscratchable sapphire, in-house movements, and special editions.

The award-winning Monaco V4 is a stunning example of one of their special edition Monaco watches created in 2009 for the 50th anniversary of this prolific model. The Monaco V4 was the world’s first watch featuring a linear winding system with optimized mechanical transmission belts.

In May of 2021, TAG Heuer released the latest iteration of this iconic watch: the TAG Heuer Monaco Titan. This stunning wristwatch retains some of the Monaco’s classic features while keeping up the spirit of innovation.

The TAG Heuer Monaco Titan launch marks the first time the iconic square case has been made from titanium grade 2. This lightweight yet incredibly strong material is ideal for watchmaking and ensures that this large watch remains light and wearable in any situation. The titanium case is complemented by the chic, silver-colored dial that exudes a level of sophistication traditionally associated with TAG Heuer.

This new edition of the TAG Heuer Monaco sports an updated version of the famous Calibre 11 automatic chronograph movement, which can be admired through the case back. The watch also retains some of the original design features that made the Heuer Monaco stand out when it was released over 60 years ago such as the left-mounted crown, the square subdials, and the bold flashes of red. 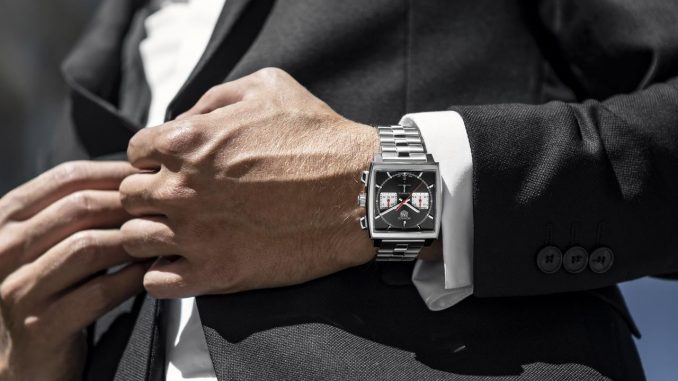 If you’re a lover of bold design and superior watchmaking, the TAG Heuer Monaco will make an excellent addition to your collection. Whether you opt for a vintage model or the latest Monaco Titan, you won’t be disappointed by the effortless sense of cool that these timepieces radiate.

For a closer look at some of TAG Heuer’s best models, take a look at our collection of luxury watches at Bailey’s Fine Jewelry.  In addition to beautiful timepieces, we also carry breathtaking examples of fine jewelry and offer a wide range of services from watch repair to custom jewelry design. Browse our website or give us a call for more information.