David Yurman: Past, Present, and Future

For David Yurman, art is more than just a hobby or career. Art weaves itself through every facet of his life, from his family to his business and beyond. When this young New Yorker first started out, he was selling sculptures in the lobby of his high school and making shoes under the mentorship of a Cuban sandal designer. Throughout his life, whether he was working with metal, leather, or precious gems, David Yurman has remained a creator and visionary, making designs that would later shape the jewelry industry into what it is today.

Topping lists of the most famous jewelry names in the world with the likes of Tiffany’s and Cartier, David Yurman is a luxury jewelry and timepiece brand founded in New York City by two local lovers. As David Yurman’s success in the jewelry industry grows exponentially, he continues to keep art and love at the core of his values. 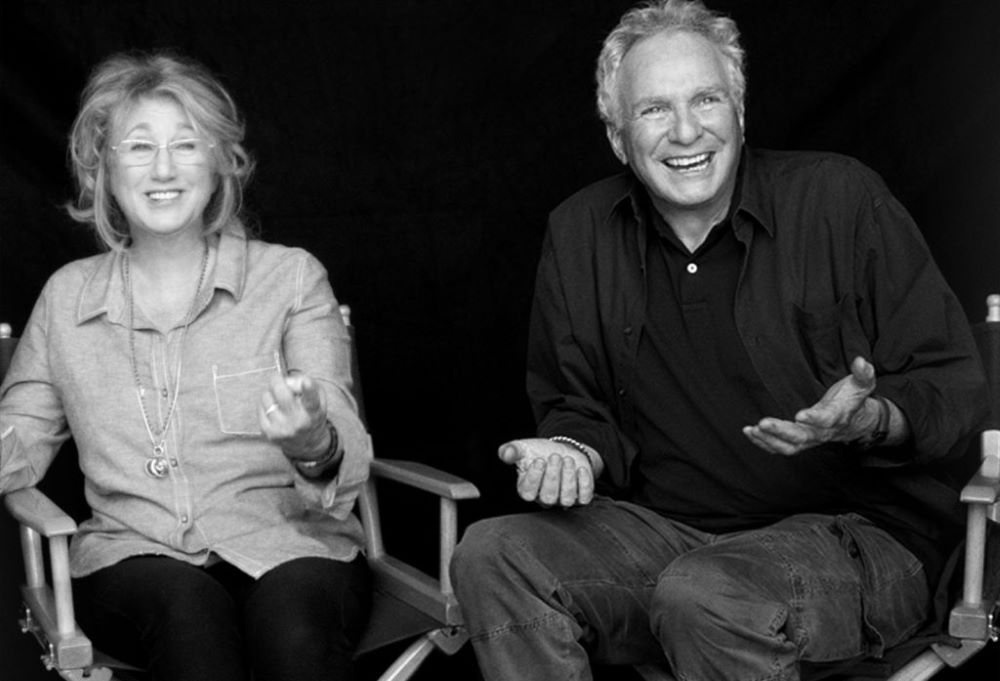 Who is David Yurman?

David Yurman is both a person and a brand. The brand’s namesake was born in New York, just miles and days apart from Sybil Kleinrock, who would later become his wife and business partner. As they each meandered separately through the ’60s and ’70s, their paths were similar but never crossed. In the fall of 1969, they each posted a personal ad on a bookstore bulletin board in San Francisco, and the rest was history.

The pair quickly fell in love and began creating art together. At the time, she was a painter, and he was a sculptor. “Life is art,” he said, and he was right. When they moved in together, they began making jewelry inspired by one another. In the early days of their jewelry business, both David and Sybil sold sculptures and paintings to fund the creation of new pieces. Jewelry has always been the medium of art that they enjoy creating together most. The couple has been quoted saying that jewelry was never about making money for them; it has always been an emotional, collaborative process that allows them to bond and “dream with their hands.”

On their wedding day in 1980, they had a meeting with a man to whom they planned to sell their newly created jewelry business as a wedding gift to themselves. When the businessman made his offer, the couple couldn’t believe how low it was, leading them to keep their business and go on to build what is now David Yurman.

Today, David and Sybil remain at the helm of their renowned brand, boasting boutique locations and jewelry production worldwide, including their brand new flagship location on 57th Street in New York City. Now, the business includes their son, Evan, who heads up the men’s, wedding, and watch division of the Yurman brand. 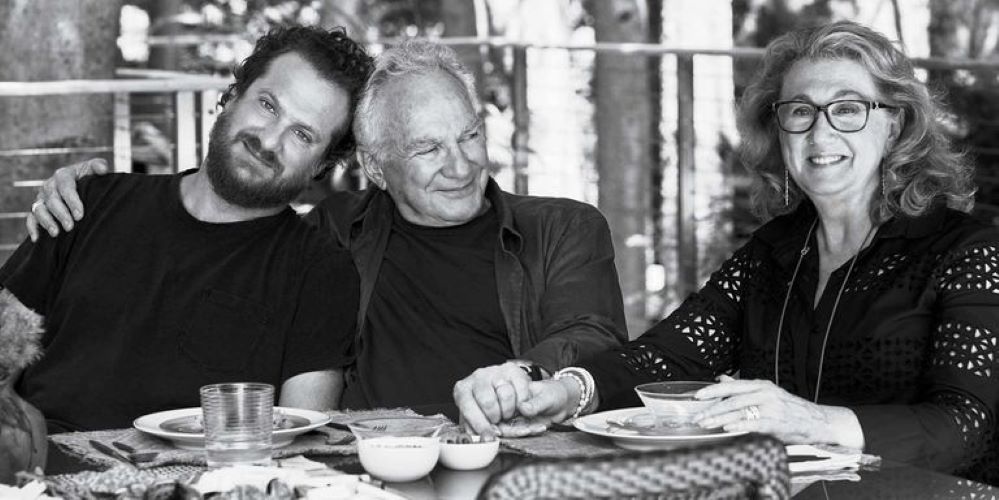 How did David Yurman get so Popular?

The brand’s first collection was born from a necklace that David made for Sybil to wear to an event at a local art gallery. As Sybil walked in, the gallery owner was captivated by the bronze necklace that she was wearing and begged Sybil to sell hers right off her neck. While Sybil declined, telling the gallery owner that it was too special to sell, she begged David to make another for its new admirer. David reluctantly agreed to make the gallery owner a similar necklace, and by the time they got home that night, they had sold four of them. With this necklace that they called Dante, and a $500 loan from Sybil’s father, the success of the brand took off. 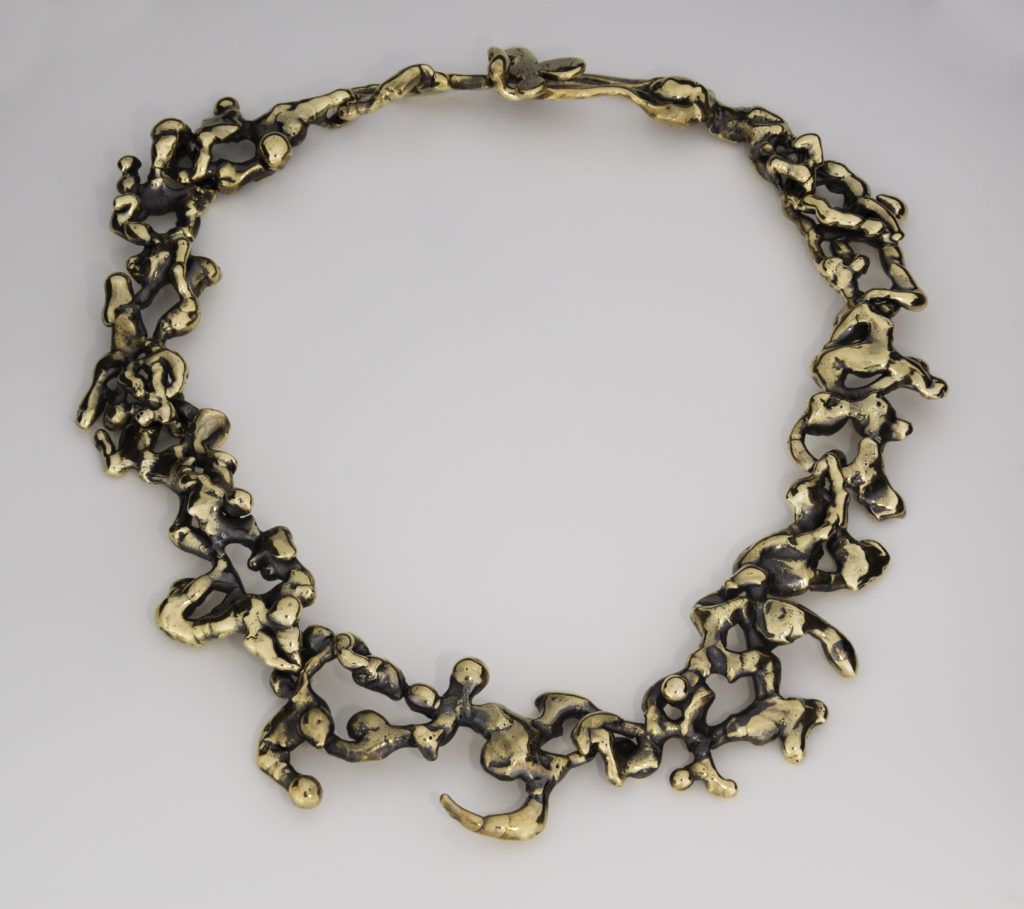 As David and Sybil began to build their brand, they were enamored by the idea of making fine jewelry more accessible. At the time, diamonds and other precious gemstones were only being set in precious metals, making them more expensive and less attainable for young artists like themselves and their peers. They saw their jewelry as wearable art meant to be enjoyed every day rather than a symbol of wealth or status. To accomplish their goal of bringing fine jewelry to the masses, David Yurman began setting his pieces in sterling silver in order to make them less expensive and more durable. This completely changed the jewelry industry as other jewelers followed suit and more consumers were able to afford luxuries that they otherwise could not have.

David also attributes some of the success to the fact that he is not, and never wanted to be, a jeweler. Men can envision buying David Yurman pieces for their wives, girlfriends, moms, and daughters because they can relate to its un-fussy nature. The intertwining of masculine style from David and feminine from Sybil is what makes the jewelry so special and appealing to such a broad audience.

As artists, David and Sybil concerned themselves not only with the product but with every visual aspect of the brand. Bearing his name, David wanted the Yurman brand to be an accurate representation of him and his wife and the life that they built together. He and Sybil continue to curate every aspect of their brand from the style of photography, to the magazine ads, and beyond.

Beginning in the ’90s, David and Sybil started working with art photographer Peter Lindbergh to shoot their first ad campaigns. Being huge lovers of photography themselves, they had a clear vision of what they wanted for their first campaigns, and Peter Lindbergh’s hyperreal, emotional style made him the clear choice. The couple went on to work with Lindburgh for 15 years, creating ads that were unlike any other jewelry ads in the world at the time. David and Sybil were keen on portraying not only the jewelry but the lifestyle behind it; eating, drinking, human emotion, and all. David and Sybil contribute a great deal of their brand success to the curation and protection of the aesthetic they created in the early days. 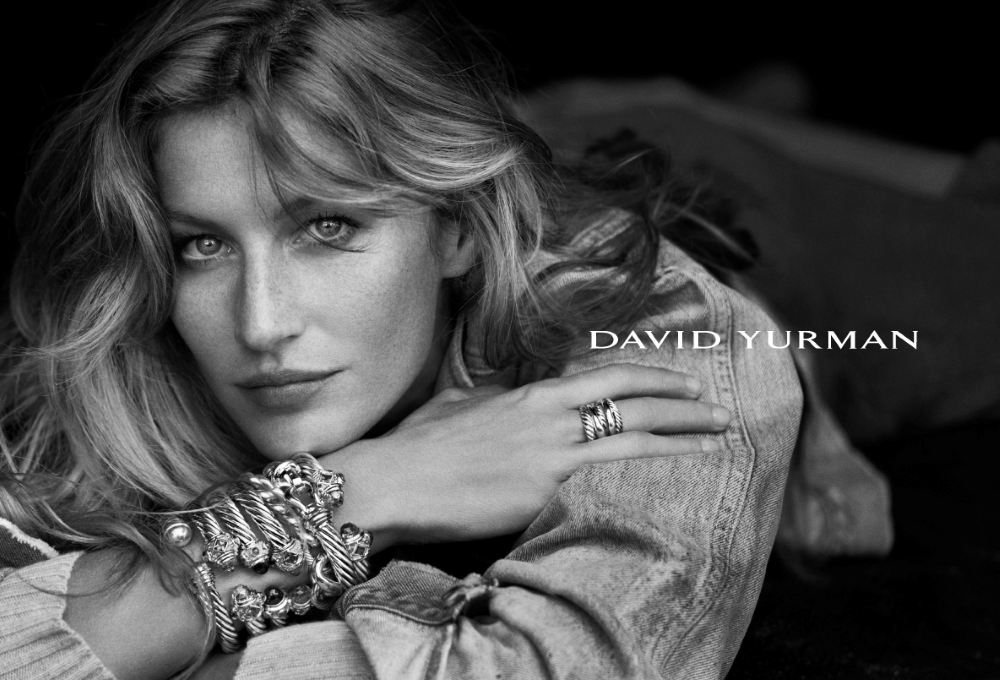 What are the Most Popular David Yurman Pieces?

Since 1983, David Yurman has used The Cable as a cornerstone to his brand and a foundation to many of his most popular designs. To David and Sybil, the cable has many meanings, including the intertwining of classic and contemporary and the intertwining of one another. Some of the first works David made for Sybil included the cable, such as a bracelet that later became one of the classics, and Sybil’s wedding ring, which later became the first piece in their wedding collection.

Today, almost all of Yurman’s best sellers include some semblance of the cable motif, such as the Cable Classic Bracelet, the Chatelaine Ring, the Crossover Collection Ring, and the Small Cable Hoop Earrings. Even the simplest designs boast incorporation of the cable, like the Pearl Earrings with Diamonds and the Initial Charm with Diamonds. 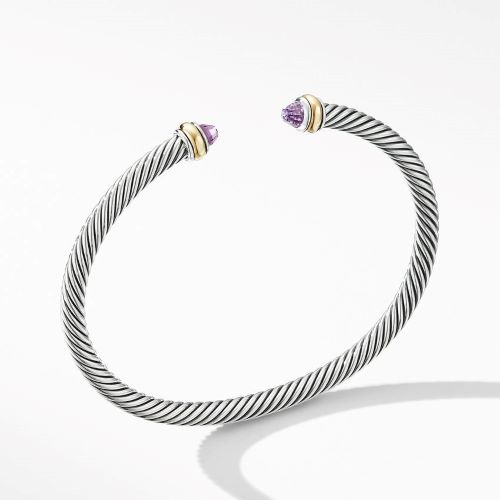 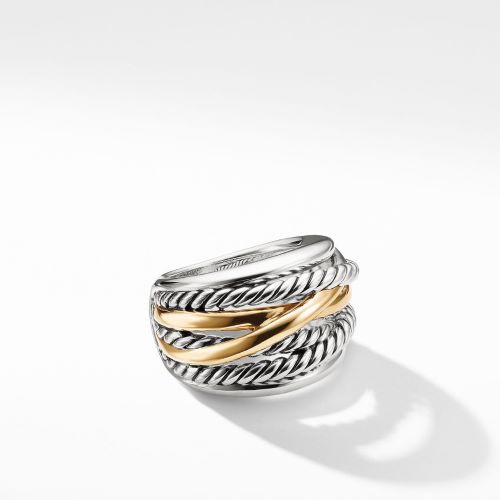 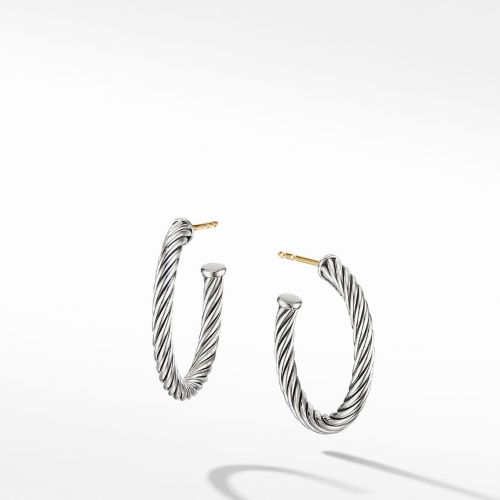 Another motif that we see carried throughout the Yurman brand is the use of cushion cut gems and diamonds. David Yurman patented a technique called the DY Signature Cut that combines the best elements of a cushion cut and round brilliant cut. This cut has noticeably sharper corners and a more defined external slope than a traditional cushion cut. Yurman uses this technique in many of his popular designs, such as the Petite Albion Ring, The Albion Ring, and many of his most popular bridal designs.

Often, we see David Yurman designs incorporating a wide range of colored gemstones from amethyst to blue topaz and even black onyx. With David coming from a more sculptural and architectural background, Sybil is typically leading the charge on incorporating colors into his designs. Here in North Carolina and all over the U.S., the Petite Albion and Chatelaine rings are often purchased in school colors and used as alternative class rings. 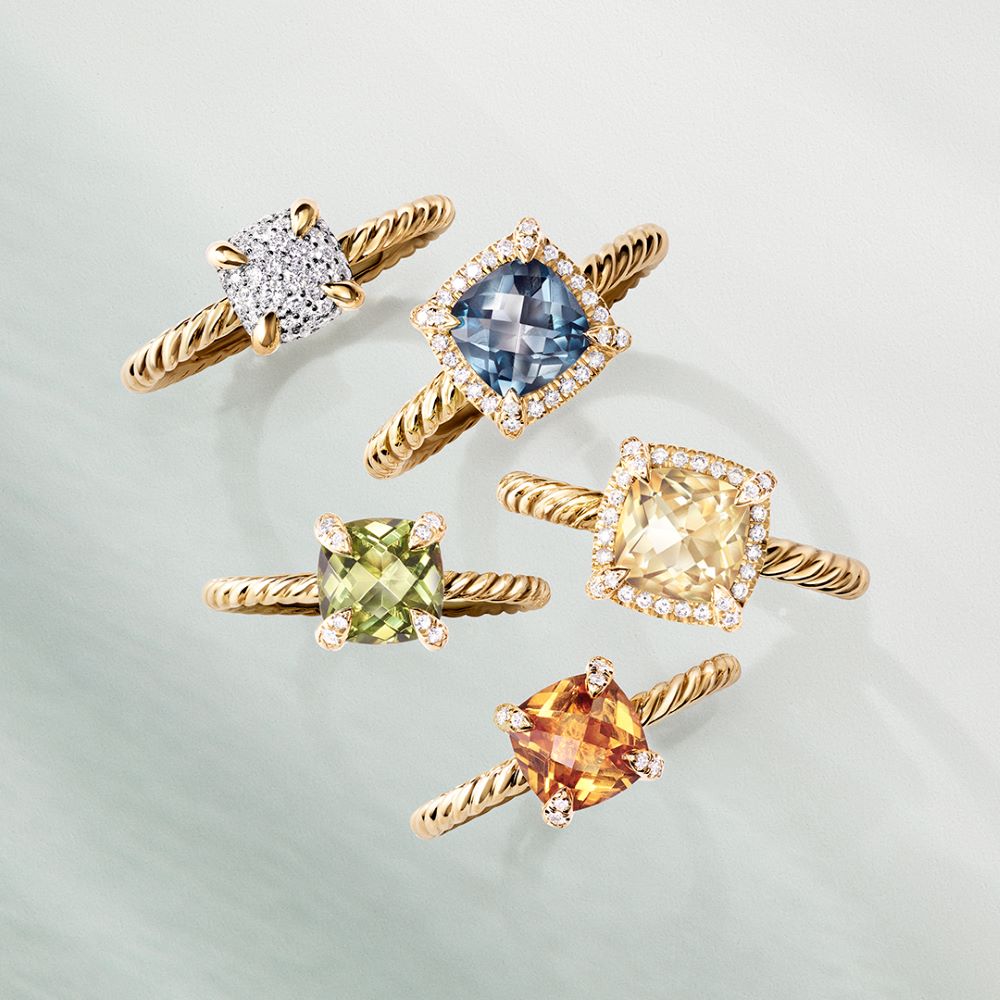 How Can I Incorporate David Yurman into my Jewelry Wardrobe?

Although David Yurman has stayed true to so many of its original design elements such as the cable motif and prolific use of sterling silver, the brand does an exceptional job making both timeless and trending pieces to fit every jewelry wardrobe. David Yurman has exceptional examples of daintier jewelry such as their Cable Classic Bracelet, X Bracelet, and Cable Buckle Bracelet that lend themselves to stacking. On the other hand, the brand also excels at larger, statement jewelry that can be worn on its own, both daily and for occasions. Whether you need a stackable band, a stunning pendant, or a statement earring, a David Yurman piece can always be the answer.

Many of the most popular designs incorporate mixed metals, which further earns David Yurman a customizable place within your jewelry wardrobe. Here at Bailey’s, we often see our patrons starting their fine jewelry wardrobe with a David Yurman Petite Albion Ring or Cable Classic Bracelet they received as a high school or college graduation gift. These fine materials and timeless motifs serve as a fantastic foundation for a beautiful collection of jewelry that can be added on to for a lifetime. 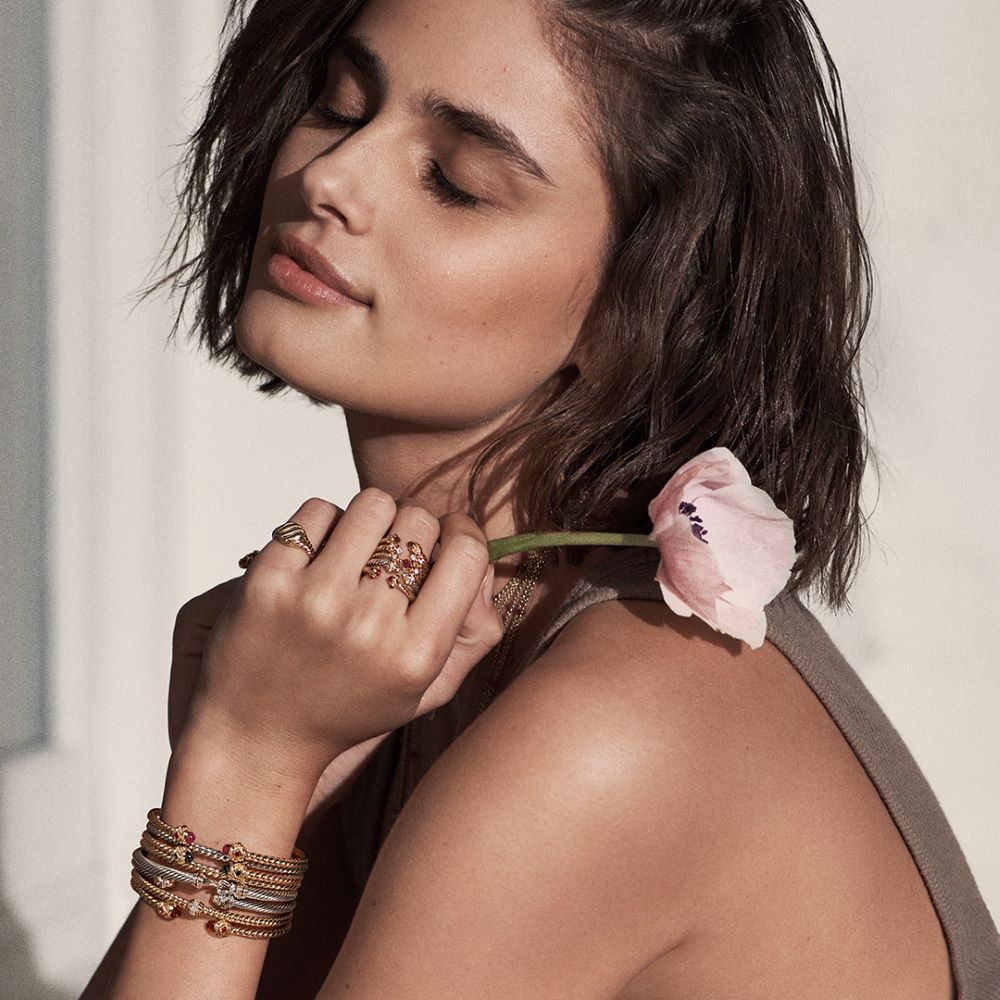 What’s Next for David Yurman?

Even after 31 years in business, David Yurman continues to inspire by creating stunning jewelry and new collections. Over the years, we have seen the brand stay true to its foundation while venturing into uncharted territories such as men’s jewelry, watches, high jewelry, stackables, and more.

Their newest release, DY Elements, features a line of amulets inspired by the circle, representing unity. Most of the pieces in the collection can be worn more than one way, such as the Swivel Ring that has black onyx on one side and mother of pearl on the other. The idea behind The Elements Collection is that you can stack a few pieces together that combine to tell a story.

David Yurman recently opened a new 5,000 square foot flagship location on 57th Street in New York City. Paying homage to the city that built the brand, the new store in the heart of Manhattan features New York-inspired designs that are exclusive to the location. Rose gold elements, a three-story entryway, and a custom-designed wood ceiling establish a stunning new home base for this worldwide brand. 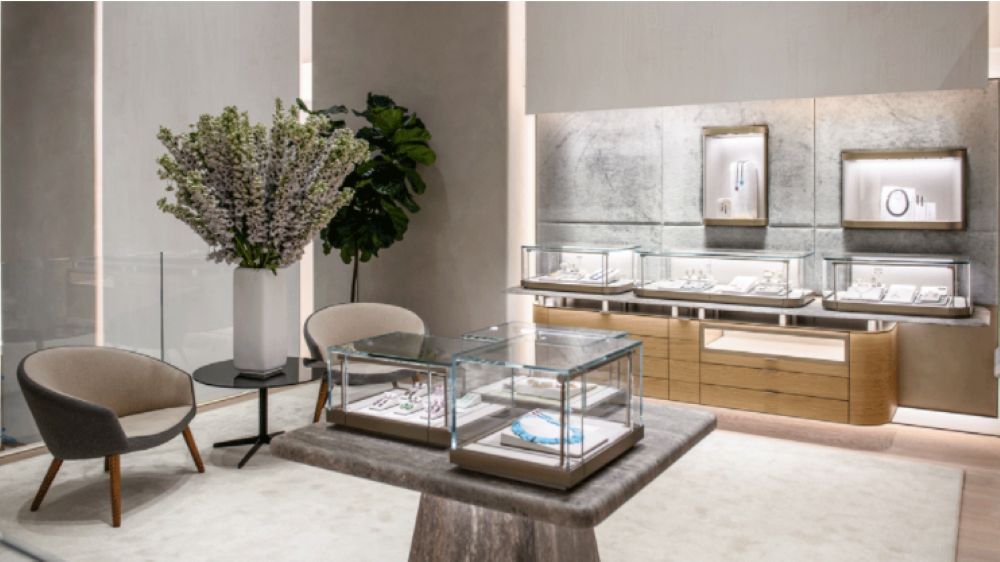 Where Can I Find David Yurman Jewelry?

In addition to the flagship location in New York City, David Yurman has almost 50 boutiques worldwide and hundreds of authorized retailers. Here at Bailey’s Fine Jewelry, we take pride in our long-standing relationship with David Yurman. Starting in the mid-’80s, we have carried a wide range of products in our stores. Our patrons have loved wearing and collecting David Yurman for many years, and we feel blessed to bring all of the most incredible pieces to our stores. We carry all of the David Yurman favorites in our stores, plus some incredible limited edition pieces. Click to shop a sample of our David Yurman inventory online or visit us at any of our North Carolina locations to shop the full selection.