The Black Rolex Submariner: A Stainless Steel and Ceramic Favorite

There are few sports watches as widely admired as the Rolex Submariner. Boasting features such as impressive water resistance and an impeccably designed Cerachrom unidirectional rotatable bezel, the Submariner is an icon of sports watch craftsmanship and functionality.

The release of a new line of Submariners which includes some of the most significant changes and developments seen in over a decade has brought on a remarkable new appreciation for the classic 40 mm Rolex Submariners. 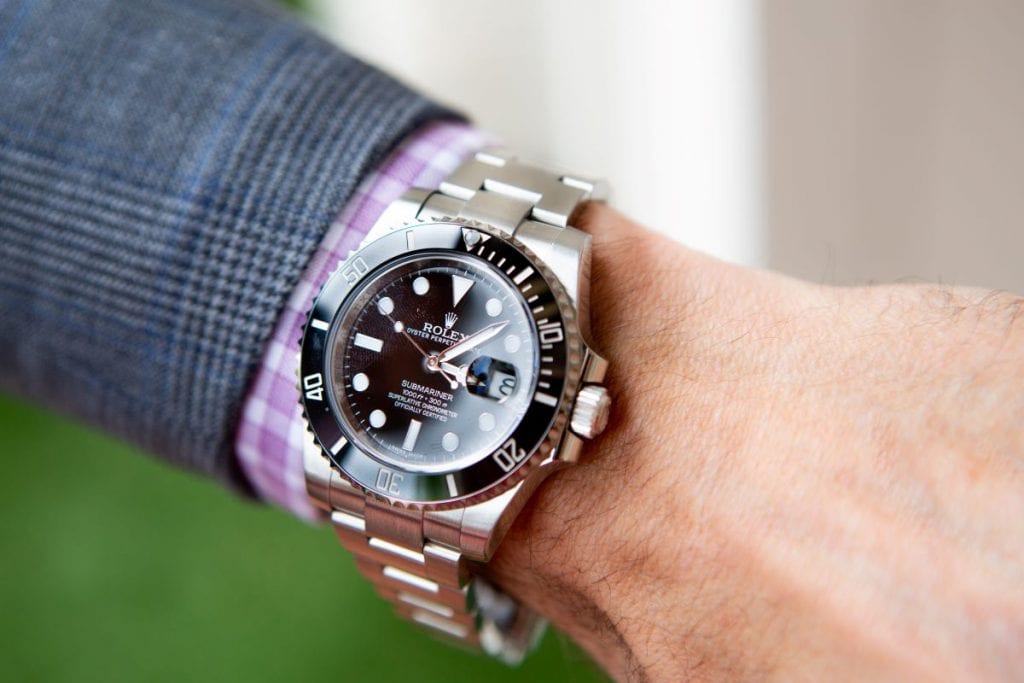 The Big Rolex Submariner Change: From 40mm to 41mm

The Rolex Submariner has been around for nearly 70 years, and since its beginning, has been sized at 40mm or less. In September 2020, Rolex released a new collection of Submariner watches, and for the first time, it has been enlarged to 41mm. This is the first significant change in the Submariner’s history since introducing the Cerachrom bezel over ten years ago.

While the changes have caused great excitement for the new model among watch enthusiasts, interestingly, there has also been an increased interest in purchasing the classic 40mm Submariner models. Watch collectors, knowing that the release of the 41mm series will make the iconic 40mm pieces more valuable over time, are snapping up the classics while they can.

If you are looking to invest in a classic Rolex Submariner, opting for a 40mm may be the smartest move you can make. Fortunately, at Bailey’s Fine Jewelry, we have a few stunning Black Rolex Submariner 40mm Steel-Ceramic models available. These particular models are fine examples of Rolex craftsmanship and design. Let’s take a closer look at what makes them so special.

A Brief History of the Rolex Submariner

The Rolex Submariner, which was first produced in 1953, marked a significant turning point in the watch company’s history: their first significant step into the world of sports watches. Until this point, Rolex had been exclusively making dress watches and everyday timepieces. At the time, the idea of concept watches was relatively new.

The Submariner’s unique selling point was, and still is, its impressive abilities as a diving watch. The first Submariner was water-resistant up to an impressive 330 ft, and their latest models boast water resistance up to a mind-boggling 1,000 ft.

Given that Rolex created the world’s first waterproof watch in 1926, the Rolex Oyster, the brand’s commitment to producing wristwatches that can be used underwater is no surprise. The first Submariner was far more advanced than the Oyster, with the addition of a new screw-down winding crown with a Twinlock system, which created two sealed zones for ultimate security during water sports.

However, water resistance is not the only feature that made the Submariner a favorite among divers and those that work on the water. The Submariner has been fitted with striking features designed specifically for diving and other water sports. For instance, the watch’s rotatable bezel includes a graduated insert that lets divers monitor the time they spend underwater. This allows them to manage their breathing gas reserves better, making diving safer.

In the 1950s, recreational scuba diving was gaining popularity, and a Rolex Board member, René-Paul Jeanneret who was an avid scuba diver, bore an idea that led to the production of the iconic Submariner. From its inception, the Submariner’s outstanding features made it popular among the U.S. and British Navy.

How Has the Submariner Developed Over Time?

The continued dedication to improving and developing all watch models over time, including the Submariner, is a testament to Rolex’s commitment to horological excellence. Developments such as the addition of crown-guards in 1959 and the introduction of sapphire crystal in 1979 have made each new Submariner model better than the last.

One of the most significant innovations was put into production in 2005: the Cerachrom bezel insert. The bezel is one of the most exposed parts of a wristwatch, vulnerable to scratches, shocks, and corrosion. It is also one of the first things you see when looking at a timepiece, for instance, on certain models including the Submariner, the bezel stands out more than the dial. For these reasons, bezels must be robust, durable, and attractive, which is why the innovation of Cerachrom was a huge step in the right direction for Rolex.

Cerachrom, an advanced technological component developed, patented, and manufactured by Rolex, is scratch resistant. The colors do not fade when exposed to the sun’s ultraviolet rays: even in the most extreme conditions, it retains its beauty, functionality, and long-lasting luster. Like many Rolex sports watches, the Black Rolex Submariner 40mm Steel-Ceramic is fitted with a Cerachrom bezel. 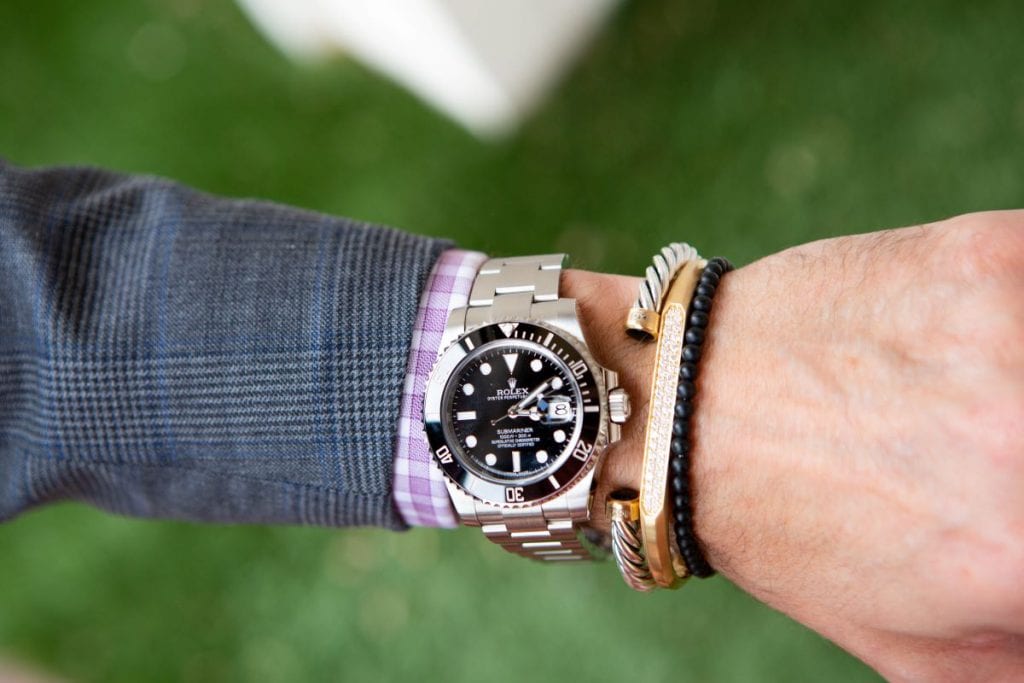 The Black Rolex Submariner 40mm Steel-Ceramic features a chic black dial that not only makes it one of the more elegant sport watches on the luxury watch stage, but is also highly functional. As a watch created for divers, the black dial contributes to its ease of use and legibility underwater and its durability, protected by the highly scratch-resistant sapphire crystal.

Rather than numerals, the Submariner has a simple but effective system of hour markers based around geometric shapes, specifically triangles, circles, and rectangles. The three, six, and nine o’clock markers are rectangular, the twelve o’clock is an upside-down triangle, and the other hours are circles. These bold shapes are easily understandable at a glance and stand out in the water. To further improve legibility, the hour markers are made with luminescent Chromalight that emit a blue glow in low light, so they can be seen even in the darkest environments.

The stylish second, minute, and hour hands have also been designed with legibility in mind. All three hands are made from stainless steel and luminescent Chromalight, allowing them to glow in the dark. Uniquely, the only portion of the second hand that is made with Chromalight is a small circle at the end so the second hand seemingly floats, and improves its visibility in low light. Both the minute and hour hands are baton-style with fine, elegant points. They are easily distinguishable from each other in the light or dark thanks to the hour hand’s three-pointed star symbol.

The three-pointed star symbol, which looks similar to the Mercedes-Benz logo, is a common feature of Rolex sport watches. While its style and practicality cannot be disputed, many Rolex fans have pondered the reasoning behind choosing a symbol so closely related to another luxury brand. There are two main theories:

Neither theory has been confirmed by Rolex. The real reason may be as simple as it blends well with the combination of circles, triangles, and rectangles featured on the dials of Rolex sports watches. However, it is always fun for Rolex enthusiasts to speculate!

Many Black Rolex Submariner 40mm Steel-Ceramic models have a simple date display window incorporated in the dial. In keeping with Rolex’s concern with legibility in their sports watches, this display is magnified by their distinctive Cyclops lens. Inspired by the giant, one-eyed creature from Roman and Greek mythology, the Rolex Cyclops Lens magnifies the display by two and a half times.

The polished black Cerachrom bezel is a striking contrast to the cool stainless-steel case, bracelet, and lugs of this Submariner model, giving it the sporty yet sophisticated look. Living up to the vision that René-Paul Jeanneret had in the 1950s, making it the ideal timepiece for performance and everyday wear. However, this unidirectional rotatable bezel is much more than just an aesthetic feature.

Every aspect of this wristwatch’s bezel has been designed with marine functionality in mind. The 60-minute graduations allow for accurate monitoring of dive time, and decompression stops, helping divers remain safe in the water. The bold, bright, white numerals and luminescent capsule on the zero marker make it easy to read in dark environments, such as underwater or at night.

You may also notice that the edge of the bezel is knurled. Aesthetically, this feature adds texture and depth to the watch and allows the attractive bezel to stand out, but, like every part of the Rolex Submariner, it has a practical use too. When divers are underwater, it can be difficult to grip a smooth bezel, particularly if they are wearing gloves, making the knurled edge essential for use underwater. 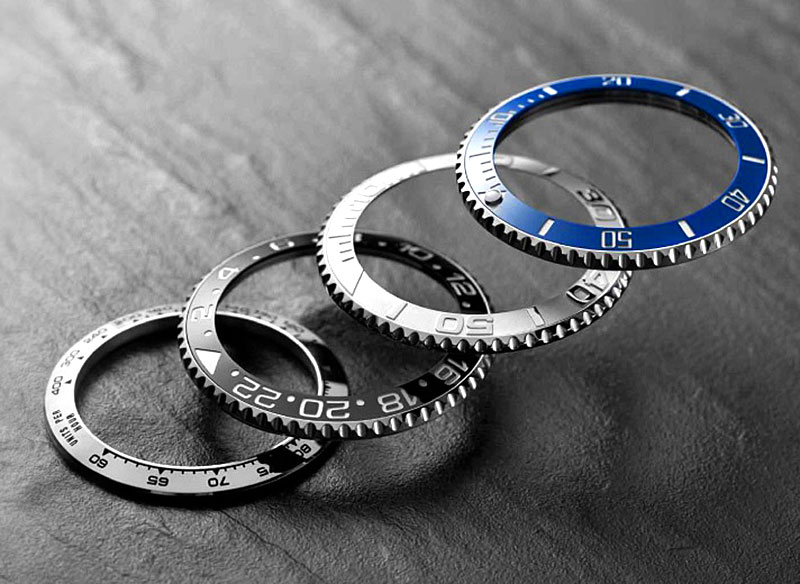 The Rolex Oyster bracelet was first introduced in the late 1930s and has remained one of their principal bracelet styles due to its stylish minimalism. The flat three-piece links add detail to the timepieces without distraction from the main attractions: the dial and bezel.

The double expansion Oyster bracelet, like every element of the Rolex Submariner, is ideal for diving. The patented Rolex Glidelock clasp allows users to expand the strap by 20mm in 3mm increments, and the Fliplock extension links can add a further 26mm. This wide range of extension options means that the Submariner can be worn comfortably by anyone in any situation, including divers wearing bulky diving gear.

The Oyster bracelet’s extension options ensure that the submariner always fits securely, and this safety is enhanced by the Oysterlock clasp, specially designed to prevent accidental opening.

The Black Rolex Submariners are fitted with a different caliber movement depending on whether they are date or non-date models: Submariner Date 40mm watches run on Caliber 3135, while the Non-Date models use the Caliber 3130. The only difference between the movements is the date function. Both of these have been changed in the new 41mm models to the 3235 and the 3230.

The Caliber 3135, which is 28.5mm in diameter and 6mm in height, was first released in 1988 and has since been used in a huge number of Rolex watches due to its great success. It is considered a workhorse movement due to its reliability and durability and has been admired by watch aficionados for decades. The automatic Caliber 3135 is a COSC certified Chronometer with 31 jewels, has a power reserve of approximately 48 hours, and a balance speed of 28,800 BPH.

The movement’s Parachrom Bleu hairspring is highly resistant to shocks and temperature variations and has non-magnetic properties. This hairspring is made from the durable materials niobium and zirconium and has a distinctive blue coloring thanks to its oxide coating.

As a self-winding (automatic) movement, the Caliber 3135 is powered by a rotor that spins when the watch is moved, such as while it is being worn. The rotor used in this bidirectional movement and the gears that wind the mainspring are coated in PTFE or Teflon, increasing their efficiency and giving them their attractive deep red hue.

The materials used in the Caliber 3135 have been carefully chosen based on their distinctive properties and characteristics. While stainless steel is the primary material used in Rolex movements, others include gold, synthetic ruby, and glucydur. 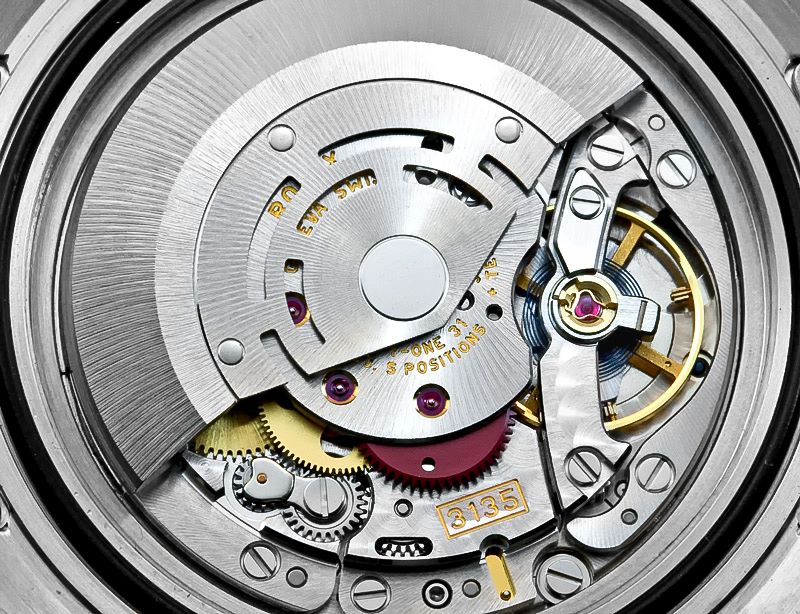 The Rolex Submariner 40mm: An Investment for Life

Purchasing a classic luxury sports watch like the Rolex Submariner is similar to buying a piece of high-end antique jewelry, a large diamond, or a luxury car: it is both an emotional and financial investment. A watch lover’s relationship with their favorite timepiece is as much about their emotional attachment to it as its technical properties.

However, when making such a significant purchase, you should also consider its potential to appreciate over time. That’s why, if you’re in the market for a top-quality sports watch, you should consider the Black Rolex Submariner 40mm Steel-Ceramic.

Given the rise in popularity of this traditional model of Submariner, we work very hard to keep fine examples in stock at Bailey’s. However, because of the popularity of these Rolex watches, we rarely keep them in our possession long enough to feature them on our website. Please contact us if you are interested in a Rolex Submariner or any other watch model that piques your interest. We also offer a wide range of services such as watch repair, buying and selling of pre-owned Rolex watches, watch battery replacement, and more. Visit us in-store or online to learn more.